Out houses Sears catalogs and sunbeams 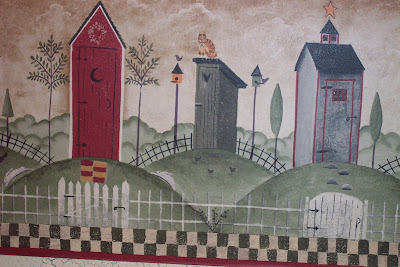 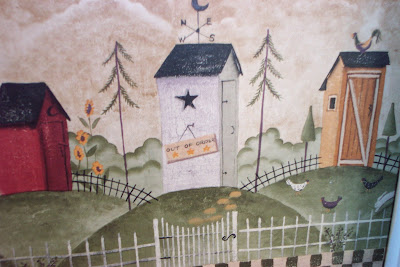 This website has pictures of outhouses taken from real outhouses, not drawings...

http://outdoors.webshots.com/album/75280708pGFZMk?vhost=outdoors
I have been thinking about outhouses lately. I had a conversation with my friend Becky about a relative of hers and the use of the old time Sears Roebuck catalog for toilet paper. She said the child loved to rip pages from the Sears Catalog, so the mother would set the child down with the catalog in the house, while she tended to farm chores, and when she returned the child would have nicely torn pages from the catalog, which the mother would then put in the outhouse to use as toilet 'paper'.
I was thinking about the outhouses back where I am from in Northern New England. We actually built one on our property in New Hampshire, and I got to design it. Well, almost. I wanted a '2 holer', but my then husband wouldn't go for it. His reasoning was, "Nobody wants to sit beside you during that process."( That wasn't my idea, but then...he's my X.)
My idea was to put a smaller and a larger hole side by each, one for smaller butts (ie; children) and one for bigger butts, (ie; my husband.) My friends Grandpa's farm had a series of run in 'sheds' that attached to the main house, stringing a long set of buildings ending in the barn. Most New England farms were set up this way, because the amount of snowfall sometimes made it impossible to get through the heavy snows to the cows. Near the barn in one shed was the 'winter' outhouse. Grandpa Proctors was a three holer. Small, medium and large size holes cut side by each across the seat area. This was important because there were always children of varying ages in the family. This outhouse was used during the winter months, and there was a regular one outdoors, which I never got to experience, because it had been torn down long before I came to know the family. The 'indoor' outhouse remained, because the sheds all stayed intact.
I fondly remember using that outhouse, cobwebs and all, although I didn't have to. The indoor plumbing had been installed for years, but the outhouse appealed to me for some unknown reason.
I never used a Sears Roebuck catalog, and I was thinking that it must have been so rough ! Then my thoughts rambled on to old catalogs, and I realized that the paper used back then, was much thinner. I beleive it was close to the Scott Tissue type still on the market for septic concious users. It seems to break down easier than the soft cloth-like brand I prefer.
Some people would by now be saying, "EWWWWWW", to the use of catalogs and outhouses, but it really wasn't so bad. Lime was kept in a pretty container in my outhouse, and after the spring cleanout of nests built by squirrels and chipmunks and webs by the spiders, it stayed clean and odor free all summertime. I kept reading material there, and flowers in a vase. It had a diamond shaped window set just so the occupant could see out across the hills, and another user couldn't see in. The seat was an oak modern one attached to the board area where the hole was cut ...( the big one, remember?)... and in colder weather I had a styrofoam ring cut from that solid pink insulation board, and it was toasty! I liked going out to that outhouse, except in really cold weather. Nights were saved by the use of a 'chamber pot', but thats another whole story.
I wonder how many outhouses are still in use around these parts of the country, and I have decided that I will devote some time to seeking them out and photographing them before they are all gone.
This photo has nothing to do with outhouses. 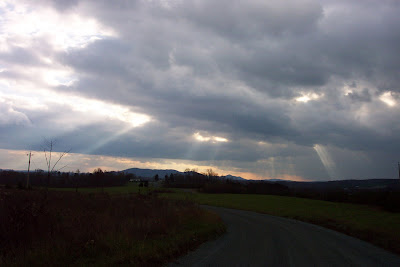 It is the sun beaming down in streamers on my road. I took this on the way back from Beckys house where the whole thoughts of outhouses began while running the dogs at her place 'over yonder'. Sometimes when I see a sky like this, I am led to believe that the sun 'highways' lead up to heaven, where the great spirit is waiting for us all...
Probably with a really nice outhouse to use...

Posted by Claudia Condiff at 8:46 AM

Gosh. I never thought I'd read a post about johns! I think the idea about the different-sized holes is probably good. It would keep someone from falling in the hole, anyway.

***There's a guy up on Rt. 834 who makes garden sheds that look like outhouses. With only a little modification. . . .

I know I would never USE an outhouse (P.U.) but I do see their appeal. I had an outhouse with my dollhouse and always thought it was very cute. Growing up in upstate NY suburbia, outhouses had been a mysterious part of the long ago.

Claudia! I'm about to fall out of my chair from laughing! The two holes got me. One for big butts, one for little...sounds good to me!!!!

You're going to have to come over. There's one right next door. I love them. Perhaps because I have irritable bladder...

Actually, I was writing a story about outhouses. I'm going to have to remember to e-mail you the picture I took to go with it. You'll crack up.

Claudia Condiff
union hall, S.W.Virginia, United States
Newly retired from Franklin County Public Schools.Prior to that I was a cosmetologist for several years.